Famed for its beautiful countryside and quintessential medieval towns, it comes as no surprise that Tuscany has been used as the backdrop for many movies, both Italian and international. The appeal is understandable; thousands of tourists come to Tuscan every year to witness the scenes so often captured in the movies for themselves. It is the fusion of nature combined with slight touches of man made structures perfectly mixed that continues to make the Tuscan countryside a top tourist destination year after year. It is this same appeal that continues to draw directors to shoot their movies here. Hundreds, if not thousands of movies have been shot in Tuscany, from the Technicolor movies of the fifties to the more recent films such as The Gladiator and Life is Beautiful that have received international acclaim. The following list of movies is just a small representation of what is out there, but they capture the essence of Tuscany and certainly celebrate the beauty found around every corner in this unique and exquisite area:
1. Under the Tuscan Sun: One of the more recent and notable movies shot in Tuscany, the film takes the viewer on a journey of self-discovery through the protagonist Frances Mayes (played by Diane Lane). After going through a painful divorce, Frances, at the urging of her friend Patti (Sandra Oh) takes a trip through Tuscany and ends up making a permanent move. Through the restoration of her villa, Frances discovers new friends, Tuscany and herself.
2. The Gladiator: The famed director Ridley Scott knew he could only find the right light to portray paradise in Tuscany, specifically in the Val dOrcia. Those who have seen the blockbuster movie will be familiar with the scene where Maximus rides back home from the war along a cypress lined path to arrive only too late to save his family. This scene is shot in the Sienise countryside. The scenes where Maximus dreams of paradise are shot instead in the Val dOrcia, the valley most often captured in Tuscan postcards.
3. Hannibal: Another film by Ridley Scott, displays Florence in its gothic glory. Hannibal, appearing to be an expert on Dante gives lectures in Palazzo Vecchios Sala dei Cinquecento as well as commits his most gruesome crimes in Piazza della Signoria and Piazza della Reppublica.
4. Tea with Mussolini: Presents Florence in a most tourist light. It includes all the greatest monuments in Florence such as Ponte Vecchio, Piazza del Duomo, Piazza Santa Maria Novella, Piazza Santissima Annunziata, the English Cemetery, Palazzo Vecchio, Piazza della Signoria, and of includes the Florentine sunsets and sunrises.
5. A Room with a View: The 1985 movie based on the E.M. Forster novel follows the artistic education of Lucy, who happens to have the perfect panorama of Florence from her room in the Bertolini pension. It is also includes the picturesque countryside accompanied by the melody of mandolins. 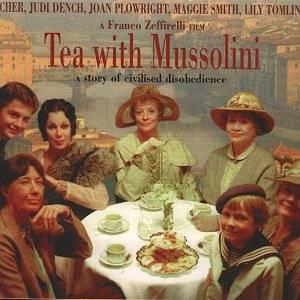 6. Life is Beautiful: Roberto Benignis masterpiece, which was awarded three Oscars (best actor, best foreign movie and best soundtrack), was set in Arezzo. The city is the ideal backdrop for the comical conquest of the beautiful schoolteacher by Benignis character. The city also reveals the inevitable that happens later on in the movie, with the signs prohibiting Jews and the conceit of the fascists.
7. Midsummers Night Dream: The Shakespearean classic is set in the town of Montepulciano, world famous for its Brunello. It includes a stellar cast of stars: Kevin Kline, Michelle Pfeiffer, Rupert Everett, and Sophie Marceau. They all bring the text to life, although without the dark undertones found in Shakespeares original. The Tuscan countrysides role is used for its folkloristic charm.
8. The English Patient: The director, Anthony Minghella, chose to film the majority of this critically acclaimed film in the monastery of SantAnna in Camprena, a setting most appropriate for recounting this story of burning passion. The film is also features locations such as Pienza, Montepulciano, and Versilia. Here, Tuscany was the perfect setting to accompany the tragic film.
9. The Portrait of a Lady: This period piece, starring Nicole Kidman, is set in a Luccan villa with typical Baroque gardens, a perfect setting for the story of a woman playing the part of a perfect wife to an upper class man, meanwhile inside she is a tortured woman desperate to break free. The villa mirrors this character, with its perfectly geometric fae but has a dark and mysterious interior.
10. Stealing Beauty: A film by the great director Bernardo Bertolucci, a young 19 year old girl, played by Liv Tyler travels to the Tuscan countryside to find her true father, and along the way also discovers herself. The film is full of beautiful cinematography, and the colors found in the film are often compared to those used by the French Fauvists. Bertolucci combines love, drama, and art to produce an unforgettable movie.