Exotic, mysterious, exciting, fascinating–these are the words that Istanbul builds its reputation on. Straddling 2 continents and host to multiple empires throughout its existence, Istanbul strikes a perfect balance between modern sophistication and old-school tradition. Here is a list of the things you shouldn’t miss while visiting this extraordinary city:

The cascading domes and six slender minarets of the Sultanahmet Mosque (better known as the “Blue Mosque”) dominate the skyline of Istanbul. Taking its name from the blue İznik tile work, it is one of the most famous religious buildings in the world and was built between 1609 and 1616.  The Blue Mosque boasts the largest courtyard of all the Ottoman mosques, measuring at the same size as the mosque’s interior. The interior of the mosque is just as breathtaking as the outside, with blue İznik tiles numbering into the tens of thousands, 260 windows flooding the mosque with light, stained glass windows and minarets with two to three balconies.

The Grand Bazaar (Kapalıçarşı)  is one of the largest covered markets in the world– with 60 streets and 5,000 shops, it attracts between 250,000 and 400,000 visitors daily! It is well known for its jewellery, hand-painted ceramics, carpets, embroideries, spices and antique shops. Many of the stalls in the bazaar are grouped by type of goods, with special areas for leather, gold jewellery and the like, which makes it a perfect one-stop shop for all of your souvenir and gift-giving needs. 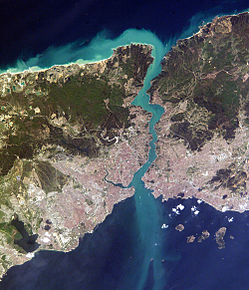 Acting as the divider between Istanbul’s European and Asian shores, the Bosphorus river is a 22 mile long strait that is the world’s narrowest strait used for international navigation. Lined with palaces, villas and restaurants, it cuts a striking path through Istanbul, making it the only city in the world that rests on 2 continents. Take a boat tour along the river in order to really soak in the skyline of Istanbul.

The Istanbul spice market is one of the largest spice trading venues of the medieval world.  It attracts visitiors from all over the world, looking for products ranging from Russian caviar to Iranian saffron. The best shops in the spice market are those that don’t mix products–so steer clear of the stalls that offer caviar next to the dried fruits and nuts.  The Spice Market is the best place to sample some of the local products, like Turkish delight (sweet gummy squares studded with fruits/nuts and rolled in powdered sugar).

We’ve all tasted the deliciousness of a late-night kebab, but imagine trying one in the country where they were created. Turkish food is a nice mixture between Central Asian and Middle Eastern cuisine, with a large variety of vegetarian options. Don’t leave Istanbul without trying these specialities:
Lahmacun–a round, thin, pizza-like dough topped with minced meat and spices, then baked in a wood-fired oven
Kumpir–a baked potato, split open and mixed with butter, cheese, and toppings such as hot dog slices, corn, olives, peas, pickles, vegetable salad, and yogurt.
Dolma–this is the name used for stuffed vegetables. The most popular Dolmas are usually grape leaves, eggplants or zucchini, stuffed with rice, minced meat and veggies.

The Whirling Dervishes are a set of monks belonging to a mystical Sufi order of Muslims, known traditionally for their spirituality, self-denial and tolerance. Dressed in long white robes, tall felt hats, and black capes, the Dervishes perform a dance ritual for the purpose of both entertaining and blessing the spectators who gather to watch this entrancing performance, and to try and attain religious ecstasy through dance.

An incredible sight to see with an ever-changing history is the Hagia Sophia. It started as the main Orthodox basilica for Constantinople in 360, then became a Roman Catholic cathedral, then an Orthodox basilica again, then became a mosque until it was decreed a museum in 1935. The history can be seen in every aspect of the building. Orthodox art was covered up by the Catholics, and then taken down in pieces by the Muslims. There are layers of history in this place, and the building itself is an architectural masterpiece!

Created as the administrative center of the Ottoman Empire, Dolmabahce Palace was built in the late 19th century and is the largest palace in Turkey. It is also home to the world’s largest Bohemian crystal chandelier, a gift from Queen Victoria that weighs an astounding 9,920 pounds. The palace holds special significance for Turkish people, as it was the residence of the first President of the Turkish Republic, Mustafa Kemal Ataturk, and the place where he passed away. The clocks in the palace are still set to 9:05 am to mark his passing.