Located in the providence of Perugia, Assisi is a quaint town with vast amounts of religious and historical importance.  Approximately two hours from Florence, be sure to visit Assisi and all it has to offer.

1. The Basilica of San Francesco d’Assisi

The construction of The Basilica of St. Francis d’Assisi began in 1228 following his canonization. Deigned in Romanesque and Gothic styles this famous basilica has two levels referred to as the Upper and Lower Church. Underneath the Lower Church is the chamber where the remains of St. Francis are held in a vault. In September 1997 two earthquakes unfortunately struck Italy, the aftershock hitting the area. The basilica was damaged and closed for two years for repairs. Since photography is forbidden inside the basilica, so be sure to go see it for yourself!

Located on top of the town, Rocca Maggiore offers a picturesque view of all of Assisi. The medieval fortress built in 1174 was one of the original fortresses built along the town walls. For the perfect view, be sure to take the hike up to the very top. The fortress is also a nice escape from the herds of tourists in the various basilicas. 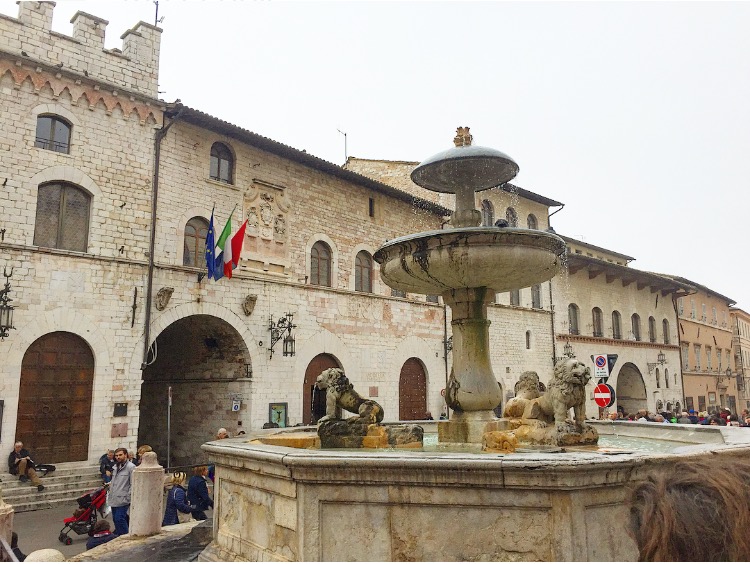 Assisi’s main square, Piazza del Comune is considered the “secular heart” of Assisi. It also serves as the center of social, cultural, and city politics surrounded by various important monuments. The fountain built by Giovanni Martiuncci in 1762 is also located in the piazza. Piazza del Comune serves as the perfect spot to sit down, relax, and to get a real feel for what Assisi has to offer.

Available almost anywhere, porchetta is a boneless pork roast and more importantly a tradition in Italy! Stuffed with garlic, fennel, rosemary, and a variety of other herbs, a porchetta panini will definitely hit the spot for lunch after roaming around the town of Assisi.

5.The Basilica of Santa Chiara

Dedicated to St. Clare of Assisi in 1265, the basilica is another one of the many beautiful Gothic style churches. St. Clare’s remains were discovered in the seventeenth century and have been on display in the church’s basement ever since. The Speaking Cross also hangs in the church which St. Francis is said to have received a message from God. Outside of the church offers yet another amazing view of the city as well.